Me and my Dad, John Williamson had a chat about one of my blacksmith forged kitchen knife styles – the Papa Knife.

You can order your very own Papa Kitchen Knife here.

Peter: The first one was actually made when I was studying the practice of pattern welding, which is creating a new steel from lots of different composites. The first one of this style was made from what was almost a failure. I’d got this billet that I’d made too hot and I remember thinking, do you know what – it’s near Christmas – I’m going to make a knife that I can give to my Dad. It’s going to have some interesting qualities and it gave me an opportunity to experiment with the polishing up and the acid etching of the steel, I didn’t think it was going to be such a nice design. In the end I made it quickly and I did a lot of experimentations and from that more developed.

John: What is a billet?

Peter: A billet is a block of steel that’s been created from lots of composites of steel.

Peter: Yes. I’d forgotten about it and discovered it again, you’d forgotten about it too. So the new one was inspired by the old one, but in the same realm as the old one. The real plan behind the making of it was to make something quite quickly and to follow simple processes. It resulted in something that I considered to be be ergonomically successful and to have a comfortable holding position. The Papa Knife was the result.

Inspired to have your own Papa Knife? You can find out more and order at our online shop.

John: What was the Papa Knife made from?

Peter: It was made from a large piece of leaf spring, or other kind of spring material. The stock must have been at least half an inch wide to be able to get that kind of length out of the handle, but I can’t tell you exactly what it was, it was a reclaimed material, ultimately it would be from a big machine that had springs in it and it would have had springs that would be about 3 inches by an inch.

John: It’s got a polish but it’s also got quite a rough finish on it, so you must have decided how far to take the polish?

John: So you made this knife out of leaf spring or similar recycled steel material. You mentioned ‘cutting’ the blade – what does that mean?

John: Is ‘cutting’ the blade a blacksmithing term?

Peter: Not particularly, I like speaking my own language in my blacksmithing – it gives people the opportunity to come down onto my level.

John: So when you’re saying ‘cutting’, it’s grinding the blade.

Peter: In the same way as someone might say you’re cutting a tenon, or cutting a hole.

John: Can you explain what cutting a tenon is?

Peter: When you’re forging a tenon, it’s like in joinery work, making a pin on the end of a bar. Even though you’re forging a bar, it sets off that kind of material, and therefore I see it like slicing out a piece of material, to add that bit of material on somewhere else later, therefore I use the term cutting. When it comes to cutting an edge, it’s different because you’re using the grinder to cut off bits of material, in the same way that a plane might be cutting off bits of material – you might say cutting instead of plaining – it’s a more straight-forward word.

John: So most of the knife is hotted up and blacksmith forged, and you’re using a grinder to finish off the blade.

John: The knife isn’t symmetrical – it’s made for a right handed person.

Peter: That’s something that was pointed out to me from Asian blades. In the same way that a chisel has a flat side and a sharp side, you could use the chisel upside down or right way up, it will give you a straight line and your removing side, a knife can be designed in the same way. If you’re cutting up a cucumber you can use the natural curvature of your wrist, you end up with a straight cut on your cucumber rather than a diagonal one.

John: So this is different to a symmetrical blade.

Peter: Symmetrical or universal knives are only made that way because factories for it easier to do it that way.

John: When we’ve showed this knife to people, at blacksmithing demonstrations and when people are visiting our home, it has proved to be very popular – in the ergonomics of it, people appreciate the handle.

Peter: The ergonomics come from similar ergonomics to many knives, or guns. If you look at the handles of a pair of secatures, they’ll be a similar shape. the outside of the secateurs will be a similar shape to this handle. We’ve got the 2 upper fingers, the middle finger, they’ve got their balance points. You should never forget about the little finger and the ring finger bring stability and the help with intention

John: We’ve also got a third knife here which has been made for a local client in Abbots Langley and it’s very much on the same style as my knife – the Papa Knife. You needed to remind yourself how you made my second knife?

That’s the thing, to try and forge something exactly the same. For your Papa Knife I never really recorded the processes that went into them, because I just thought of them as Christmas presents at the time. I did think they were good designs. I didn’t think that one day I’d have a lot of people asking me to make them. So to try and make if again I had to look at the original one and sort of weight it up a little bit, to try and figure out what size of stock I really wanted and then give it a go again – that’s all you can do.

John: So you could make this for other clients – we believe it’s quite popular?

Peter: Oh yes, again – as long as they weren’t being millimetre specific.

John: Every knife is going to be bespoke and unique, you can follow the style, as long as people know that it won’t be 100% the same?

Peter: Within that criteria the same style can be replicated. The nice thing is that it doesn’t even have to be that style, you could say that I want a completely different style, but with similar elements, and then I can create a whole new design all together.

John: So the design of the Papa Knife could develop more?

Peter: Rather than keeping to this one prototype style, it’s just the birth of a style, not an exact model to follow.

John: I notice that in the handle there’s a sort of pattern, a bit like a snake skin which has made it a bit different to the Papa Knife.

Peter: I think that’s probably where the scale has come off, and been polished in. The scale was in its original housing when it was hammered in.

John: I can see marks at the back of the handle, that seem like a file

Peter: It’s not a file, although I sometimes leave a piece of the original recycled material to remind people of its origins. The marks come from the marks of the filing at the latter part of the process. The file is used to smooth is all up so that you can get the spine of knife to follow and create the curvature of the design. At the end of it I put in more material than I needed for the whole object and I had a hot file with very big teeth and that just gouges out a lot of the material and helps you round off a lot of this. It’s a bit like grinding but it’s an older blacksmiths’ way of grinding to help you smooth everything off.

John: So has this file got quite big teeth in it?

Peter: Yes, great big teeth – each tooth is like a child’s milk tooth.

John: Is this process done cold – when the metal is cold?

Peter: No, you do this while the metal is hot, when you’re filing it you get loads of little fairies – that’s another technical word – fairies.

John: Is that one of your words?

Peter: Yes. It’s where you get the little sparks, you’re filing very hard material, all the little bits that come off. It will spark and fizzle as the oxygen starts to react with the sparks, so as you’re filing you get loads of these things like sparklers coming off the knife where you’re filing.

John: How long does the metal stay hot enough to work?

Peter: About a minute and a half.

John: So you’ve got to work pretty fast?

Peter: Yes, very fast and the optimum window is about 20 seconds from out of the fire, to in the vice, to filing, that’s your optimum range. Past that time the steel starts to get colder and colder, from the outside to the inside. Because it’s getting colder from the outside to the inside the outer steel is what you’re filing, and because steel retains its heat while you’re hammering, it keeps getting hotter while you’re hammering it, the friction from the hammer will heat up that bit of metal.

While you’re filing it, however the steel is literally just staying still all the time, so there is no heat that is built up inside it, just getting colder and colder, your file will find it harder and harder to remove that material. It’s not a very rewarding process.

It’s quite difficult as you need to get everything up to the correct temperature and then you need to be filing it and also you need to putting the amount of pressure on the metal that the file needs, you can knock the piece of work out of the vice – which would mean that you’ve got to pick the piece of work up and get back to where you were, you’re going to make less progress.

If you fumble, and it’s just spent five minutes in the fire, it takes you ten secs to get it from the fire into the vice, but if you drop it during those ten seconds, it takes you another seven seconds to pick it up, so you only have three seconds of optimum working time left. If that happens, you’re much better off to put it straight back into the fire and start for heating process again.

John: Any other thoughts?

Peter: Get me to make you a Papa Knife – you’ll like it!

If Looking for a steel bladed high carbon kitchen knife? Whether it’s a knife for you or a family member who’s a cooking fan, the Papa Knife could be a good choice.

You can order your very own Papa Kitchen Knife here. 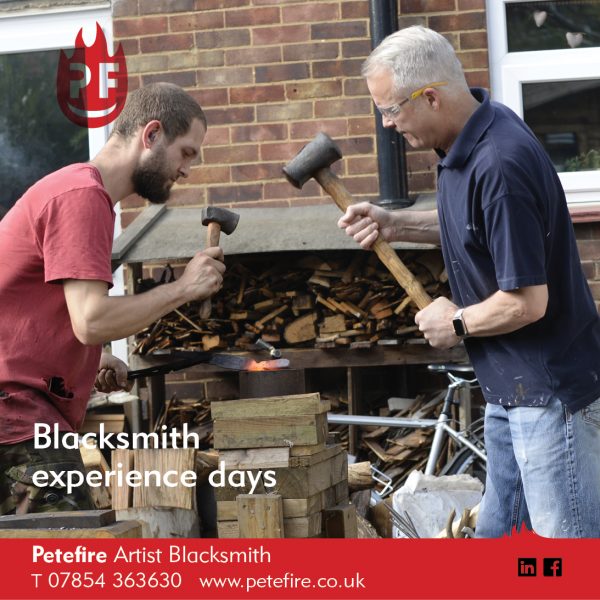